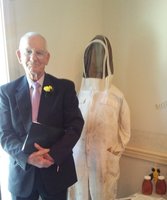 Thomas “Tommy” Hampton Sumner, 84 of Bristol, passed away Wednesday, September 30, 2020 in Tallahassee. Tommy was born in Bristol, August 29, 1936, to the late Clarence and Elma Strickland Sumner. He graduated from Liberty County High School and later attended Baptist Bible Institute. Tommy served as minister in several churches for over 40 years and simply loved sharing the gospel and ministering to those in need. He also served his country in the United States Army for six years and was a beekeeper since 1958. Other than his parents he was preceded in death by his wife Cora Louise Sumner and daughter Marilyn Sumner. Survivors include his sons, Wayne Sumner and his wife Elizabeth of Bristol and Roger Sumner and his wife Jessie of Citra; his daughter, Carolyn Wright and her husband Curtis of Gainesville; a brother Bobby Sumner and his wife Shirley of Haines City; his sister, Jackie Bateman and her husband Merrill of Iowa; three grandchildren William Sumner and wife Hannah, Jonathan Sumner and wife Tiffany, and Kaitlin Sumner. Two great grandchildren Reece Jackson and Luke Sumner. Extended family Billie Sue Durden and husband Lavant, and Kathy Bradshaw. Funeral services to honor and to celebrate Tommy’s life will be held 2:00 p.m. Saturday, October 3, 2020 at Lake Mystic Baptist Church. Interment will follow in Lake Mystic Cemetery. The family will receive friends one hour prior to services on Saturday at the church. Adams Funeral Home is in charge of the arrangements. Online condolences may be made at adamsfh.com 850-674-5449