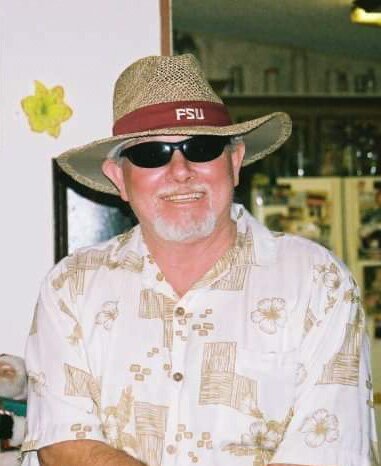 Please share a memory of Danny to include in a keepsake book for family and friends.
View Tribute Book
It's official, negotiations have ended, Danny Stephen Revell, 67, of Bristol was surrounded by his family as he was selected by the late Bobby Bowden to be his assistant head coach for his beloved Seminoles for Heaven’s home team for eternity. Danny will be in close contact with his father, the late Jack Revell and mother the late Roslyn Snipes, his brother the late Ricky Revell, and a sister the late Leann Higbee. Danny has left his home team in the very capable hands of his loving wife of 24 years, Angela Revell, his daughter Aimee Wood and her husband Cole, his sons Seth Revell, TJ Davenport and his fiancé Rachel, Jamie Moffitt and his wife Jenny and a sister Gaye Revell. Danny was born on April 11, 1954, in Marianna, FL. The early part of his life was spent in Bristol and California, returning to Bristol as a young teenager and living with his late Uncle Harrell Wood and the late Aunt Millie Revell and their children. Upon completion of high school Danny learned the carpentry trade from his late Uncle Harrel Wood Revell and would use these skills throughout his life. Danny learned many things from his Uncle Harrel Wood, one lesson learned and has since been passed down to his sons is, “Measure twice and cut once”. In 1975, Danny left Bristol to serve in the United States Army as a Paratrooper for the 82nd Airborne Division. Upon returning home, Danny held various positions, working for Georgia Timberland and then for his Uncle Harrel Wood building homes. A few other positions include working as the field superintendent for construction of the FSU Panama City campus; the DOC in Liberty County as their vocational carpentry instructor, teaching inmates’ routine maintenance which included carpentry, welding, and plumbing skills. Of all the jobs Danny worked, he always said that the best job of his life was working for his Uncle Harrel Wood. Danny was an avid reader and very knowledgeable on many subjects; he truly was a very smart man with an ethical demeanor. Danny loved life and was known to help anyone in need. He loved his wife, his children, his brother and sisters, his nieces and nephews, his aunts and his uncles, and his cousins, and especially his grandchildren: Vanessa and Brianna Moffitt; Ashlyn, Emily, Kaitlyn, and Isabell Wood; and Gauge, Everett, Landon, and Sadie Davenport, and one special niece that was as close as a granddaughter as you can get, Millie Revell. Those who knew Danny, knew that he didn’t venture out much on the weekends because there would be a sporting event on television. He loved watching his Seminoles play football, if FSU was not playing one would find him watching golf. While most of Danny’s time will be spent coaching God’s team, the contract explicitly states that Danny will be filling any free time teaching others the finer art of golfing and playing through on the finest golf courses in creation. Services to honor Danny’s life will be held 11:00 a.m. Saturday, September 4, 2021, at 11867 NW Lake Mystic Lee Duggar Rd, Bristol, FL. All are invited to attend. Adams Funeral Home is in charge of the arrangements. Online condolences may be made at adamsfh.com
To send flowers to the family or plant a tree in memory of Danny Revell, please visit Tribute Store

Look inside to read what others have shared
Family and friends are coming together online to create a special keepsake. Every memory left on the online obituary will be automatically included in this book.
View Tribute Book
Services for Danny Revell
There are no events scheduled. You can still show your support by sending flowers directly to the family, or planting a memorial tree in memory of Danny Revell.
Visit the Tribute Store
Share Your Memory of
Danny
Upload Your Memory View All Memories
Be the first to upload a memory!
Share A Memory
Send Flowers
Plant a Tree