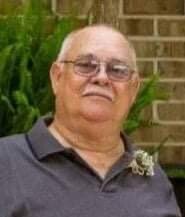 Please share a memory of James to include in a keepsake book for family and friends.
View Tribute Book
James Howard Cox, Sr., 74 of Altha, passed away Monday, July 26, 2021. Howard was born in Port St. Joe, Florida to the late Allen and Willie Lee McQuagge and had worked as a meat processor until his retirement. Howard also served in the United States Military during Vietnam where he was awarded the Purple Heart. He loved his family and enjoyed spending time with kids and grandkids and was an avid hunter and fisherman. Other than his parents James is preceded in death by his brothers, Terry and Cliff Cox and a sister, Gladys. Survivors include his sons, James Howard Cox, Jr. and his wife Deanne of Altha, Ronald Cox and his wife Tanya of Altha, Danny Cox and his wife Alisha of Clarksville, Michael Cox of Altha and Christopher Cox of Panama City; the mother of his children Dawn Cassidy of Fountain; his brothers, Robert Cox of Panama City and Raymond Cox of Fountain; a sister Edna of Panama City; twelve grandchildren and three great grandchildren. A memorial to celebrate Howard’s life will be held 10:00 a.m. Saturday, July 31, 2021, at Adams Funeral Home Chapel with Allen Nichols officiating. Adams Funeral Home is in charge of the arrangements. Online condolences may be made at adamsfh.com
To send flowers to the family or plant a tree in memory of James Cox, Sr., please visit Tribute Store
Saturday
31
July

Look inside to read what others have shared
Family and friends are coming together online to create a special keepsake. Every memory left on the online obituary will be automatically included in this book.
View Tribute Book
Share Your Memory of
James
Upload Your Memory View All Memories
Be the first to upload a memory!
Share A Memory
Send Flowers
Plant a Tree